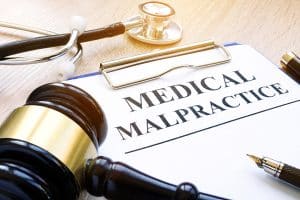 One of the leading causes of death in the United States is medical error. There have been countless articles and studies showing just how much of a problem it is. You would be forgiven for thinking that all this data and evidence must have led to a reckoning in the medical field, and that victims of malpractice would be getting more compensation due to hospitals and medical professionals recognizing the poor care.

But a curious thing has happened; instead of the number of successful medical malpractice cases increasing, they have dropped exponentially. A recent perspective piece in The New England Journal of Medicine (JAMA) reports:

[P]atients lose about 80% of medical malpractice trials. However, fewer than 1 in 20 claims end in courtroom verdicts; about one third are settled out of court with a payment to the patient, and the remainder are dropped or dismissed. [….] The number of paid claims against physicians has decreased by 75% in the past 20 years.

If those numbers look intimidating, we understand. It’s why hiring the right medical malpractice attorney to represent you is such a critical decision; it is literally your best chance at having your story heard by a jury. The insurance companies spare no expense in hiring attorneys and experts in order to deny victims of malpractice their just compensation and increase corporate profit for their shareholders. As attorneys who have secured more than $250 million in medical device and malpractice litigation, we know firsthand just how challenging these cases are – and what it takes to win them, even in states that have passed laws making it even more difficult for the victims of malpractice to recover.

Why are there so few medical malpractice cases when medical negligence is so common?

We know that many Americans experience medical errors. A 2017 study by the Institute for Healthcare Improvement and NORC at the University of Chicago found that about 80% of respondents sought medical treatment that year, but more than one out of every five – 21%, to be exact – experienced some kind of medical error in their care. Of those patients, more than a third said that error led to harm in some way. The report also says that in 45% of cases, the error was reported, but in 31% of cases, it was not. (In the remaining 24%, the respondent did not know.)

This is a red flag about the decreasing number of medical malpractice lawsuits: less than half of all cases of medical error are actually reported, and almost a third are definitely not reported.

But why? Some patients may not realize they were the victim of a medical error, or that they have any power in the event of an error. Doctors and nurses are the most trusted professionals in the country (regardless of how people feel about hospitals or healthcare in general), and patients may be more inclined to “forgive” a mistake, especially if they think they have not been harmed. The JAMA researchers also suggest that “movement in health care systems toward greater openness about medical errors has reduced patients’ inclination to sue. A few error-disclosure programs have reported this outcome,” though they admit that the wider picture is “unclear.” (For what it is worth, opinions about apologies are mixed, but there is anecdotal evidence that some families may be more willing to agree to settle if an apology is offered, rather than engage in litigation.)

Another reason why patients may choose to forgo a medical malpractice lawsuit is tort reform – AKA, damage caps. Briefly, tort reform legislation has passed in 19 states under the alleged guise of ending “frivolous” lawsuits. What these laws really do is prevent victims from obtaining justice by making it impossible for them to get the full compensation they deserve. Kentucky has not passed this kind of legislation, but both Ohio and West Virginia have.

A quick look at corporate shielding in medical negligence claims

There may, however, be another factor at play. In the JAMA article, the writers point out that “Unlike practitioners, health care institutions need not report payments made to resolve negligence claims against them.” The reason for this is “corporate shielding,” which allows hospitals and facilities to take the hit, so to speak, instead of the actual doctor or professional who made the mistake. The implication here is that the number of actual medical malpractice claims could be much higher than what is reported, for potentially two reasons:

One reason corporate shielding is so common is that more and more independently owned and operated hospitals are closing. (Kentucky has lost five rural hospitals since 2009, and is on track to lose more.) Dr. Martin Gaynor, the E.J. Barone University Professor of Economics and Public Policy at Carnegie Mellon University and a former Director of the Bureau of Economics at the U.S. Federal Trade Commission, told News 5 Cleveland that “in the past 20 years, there have been more than 1,600 hospital consolidations around the country,” and that the quality of care at such facilities often deteriorates. When these mergers turn hospitals into corporations, however, the institutions are then protected by the laws which govern corporations.

In short, we may never know just how many people are truly victims of medical malpractice, how many doctors are committing these errors, and how much compensation is actually being paid.

Imagine for a moment that your loved one was irreparably harmed by an act of medical negligence. Perhaps a surgeon made an error and that mistake rendered your spouse paralyzed. Perhaps a mistake was made during labor and delivery, and your child has sustained permanent brain damage. Maybe Radiology made a diagnostic error and your loved one ended up undergoing treatment for a condition he or she did not have, while his or her real illness was allowed to progress.

These are the types of medical malpractice cases Wilt & Associates, PLLC handle: cases where people’s lives are changed, often forever. We know exactly what the average victim is up against when a medical mistake takes everything away. We know that medical facilities often employ a small army of lawyers and legal assistants, and that they are protected by the same laws and regulations which allow corporate malfeasance to proliferate in other industries.

We also know that by putting the full power of our team and our extensive resource network behind every case, we give our clients the best possible chance at recovery. We prepare every case we take for trial, even though many cases end up settling before a verdict can be rendered. We employ the latest cutting-edge technology in our presentations, so that juries can see for themselves what went wrong, and what price you have paid for those mistakes. Our network is comprised of medical experts, financial experts, life planners, and other professionals who help us present your story in full. We make sure that juries and opposing counsel understand the full scope of your injuries, and the full scope of your losses – then, now, and in the future.

Wilt & Associates has never backed down from a fight. If you believe you or your loved one was a victim of medical malpractice in Kentucky, we want to hear your story. Call us or fill out our contact form to schedule a free consultation at one of our offices in Lexington or Louisville. If you cannot travel, we can schedule a phone or video conference instead. Proudly serving Kentucky, Ohio, and West Virginia.